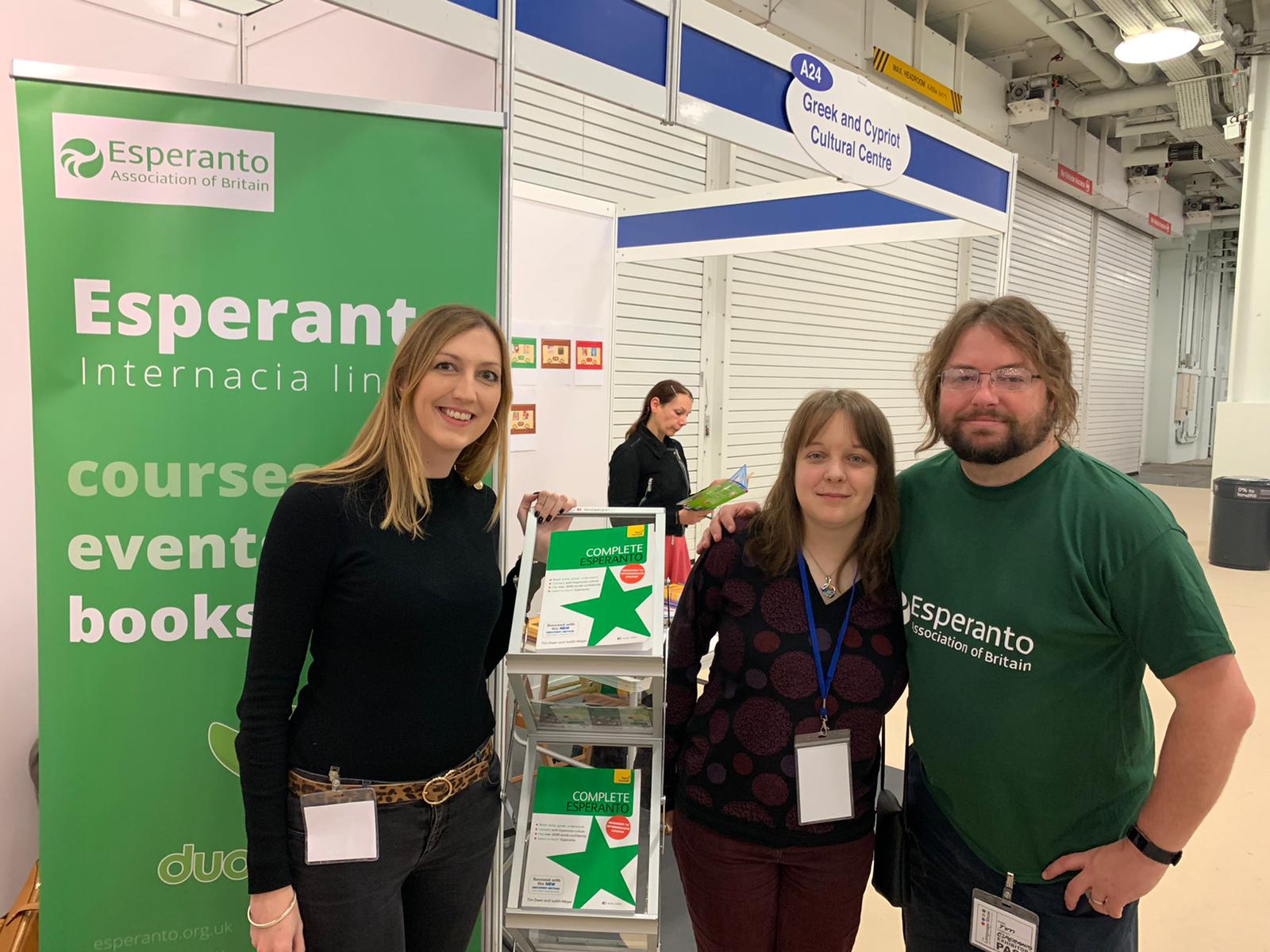 I first read about Esperanto when I was 13, in a popular science book on linguistics with the catchy title “Did the Neanderthal men speak English?” (in German). One of the chapters of the book was dedicated to the history of auxlangs, that is, languages created to help international communication. The book mentioned that Esperanto
– is the only such language with even a modicum of success (spoken by several million people today)
– provides a solid foundation for learning other languages later
– can be learned at a fraction of the effort
Since my goal at that age was to learn all the languages in the world, it made sense to start with the easiest, which, even if it wasn’t particularly useful, would help me pick up other languages much more quickly.

At 13 it was hard to find materials for learning Esperanto, but at 14 I found a free online course with an e-mail tutor to correct my exercises. That is how I learned the language, largely in self-study. Seeing that learning a language could be easy and fun was a huge boost of confidence, which enabled me to envision learning other languages in self-study – I started learning Chinese and other languages not too long after I reached fluency in Esperanto.

I started to talk to people from around the world. Learning English had put me into contact with a group of people from the USA, Canada, the UK and Ireland. Through Esperanto, I began to chat with people from Russia, Japan, Brazil, Ghana and Iran. This greatly changed my world view.

It was through Esperanto that I met my boyfriend of many years, an American who was visiting Germany and who found me in Pasporta Servo, an offline hospitality network for Esperanto speakers, which had been around long before Couchsurfing etc. copied the idea.

It’s also because of Esperanto that I started traveling a lot, and visited places that are not classic holiday destinations. Through Esperanto, I traveled
* Twice to the Czech Republic (once to attend a seminar on SEO and web technologies taught in Esperanto)
* Twice to Poland (once meeting Nobel Peace Prize winner Lech Walesa, who came to talk with our widely international group about our visions for Europe)
* Once each to Sweden, Lithuania, Spain, Ukraine, Belgium, France
* I also traveled to China to represent the World Esperanto Youth Organisation at a conference on EU-Chinese dialog between youth organisations on the use of social media.
Most of these trips were paid by Esperanto organisations or by the EU.

I also got four jobs through Esperanto, unrelated to the trips:
1. Developing a Drupal site about Esperanto
2. Developing a social network unrelated to Esperanto because I met the investor at an Esperanto event
3. Developing a machine translation system using Esperanto as interlingua
4. Co-authoring the new edition of Teach Yourself Complete Esperanto, together with Tim Owen (guy to my right in the image above)
If you ask me whether it makes sense to learn Esperanto for economic reasons, I’d still say no, but I personally can’t complain 😉

I’m a geek, so I particularly enjoy Esperanto meet-ups as a way to meet other people who are interested in languages, science, technology or politics and to get new ideas for projects. There’s an event I usually go to which lasts 7 days around New Year’s, and where I can meet 200-300 people, most of 20-35 years old, representing 25+ countries, all of who enjoy meaningful conversations. There are concerts and movies, too, drinking and dancing, but the group pressure is off, there’s a quiet candlelit room for tea drinking, too, and those who had enough vodka may find themselves wandering into that one for the rest of the night. The meet-ups are participant-led: anyone can stage sessions (lectures, workshops, discussion groups) on anything at all, so it’s a week full of getting introductions to diverse things from Hungarian language to hand massage to data compression to capoeira. I once noticed someone was giving a lecture on Schroedinger’s cat at 1am, with several dozen people listening. Only in the world of Esperanto.

Tl;dr: Esperanto is liberating and its influence is pervasive in my life: most of my free-time activities and holidays are very different from what they were before and occasionally Esperanto enters my work life or projects as well.

Are you curious about Esperanto now? Of course I’ll recommend you buy the course I myself wrote (buy it from BookDepository with free worldwide shipping and don’t support Jeff Bezos), but if you’re not ready to make an investment yet, the Duolingo Esperanto course is free and good enough to get a first impression of the language.

If you are learning a language today, chances are that your study sessions are looking vastly different than they would have even 10 years ago. This is a part of our daily life that has been radically transformed by the digital age.
The revolution came in 7 waves:

Regular texts gave way to hyperlinks and dictionary programs. Digitalization also made it much more likely that someone would consult a brick of a dictionary with 500,000 entries plus sample sentences – as long as it’s on the smartphone and not on paper.

Everything includes audio or video now. It feels obvious, but: when did you ever tap next to a word in a paper dictionary in order to hear it pronounced? Our habits really changed. For the Defense Language Institute’s online materials, media are the essence of their lessons. They take authentic target-language radio and TV broadcasts and then teach you to understand them. And as for flashcards, using open-source tools like Subs2Srsand Anki, you could create digital flashcards that play two-second excerpts of your favorite foreign TV show and then quiz you on what was just said. (step by step guide)

Auto-correction ran quite a gamut. A 10-year-old can probably create a fill-in-the-blank text and some Javascript that checks whether the answers match the correct solutions. Much more sophisticated results of the same innovation are spellcheckers, which are already ubiquitous, and now style-checkers. The most exciting application of auto-correction is in accent improvement. At Wordbook, you can pronounce Chinese words and phrases and the computer will show you how closely you matched a native speaker’s pronunciation. Rosetta Stone implements similar technology.

Learning a language in self-study used to be a solitary hobby, which partly explains the high number of people who abandon a course after the first few lessons. When web 2.0 became a hot item, language-learning websites started to add a social component. It can take three forms: competition, encouragement and help.

Competition is when a website encourages you to best your friends, for example by displaying a highscore based on how much you studied. Some examples are the Read More or Die competition or the 6 Week Challenge.

Alternatively, or also in conjunction, sites can increase the likelihood that you get encouragement from your peers. Duolingois a master at this: when you log into Facebook, ready to waste some hours there, only to find that a bunch of your friends are applauding you for having learned Dutch plurals on Duolingo, guess where you’ll be heading next. This kind of positive feedback loop just does not happen when using traditional courses or even attending local classes.

Users helping users is also an important part of modern language-learning websites. Most have a forum, chat or user diary/blog. Then there are sites where people will correct your foreign-language texts for free or record audio for you, taking this to the next level.

What if your friends are ready to help and encourage you, but you still can’t motivate yourself to spend much time on phrases like “the duck eats the strawberry”? The next innovation looked at how to ensure you’re genuinely interested in what you’re learning, rather than the one-size-fits-all approach that is still commonly-found even today.
Every human has different interests. How can companies create language courses that will cover hardware news for one person and gardening for another?

Don’t make mistakes or you’ll lose a life. Collect play money to buy vanity items from the store. Complete this series of lessons in order to gain access to a special area or mini-game. Learn Esperanto in Second Life. Play Space Invaders to review Japanese Kana. Solve a detective story while learning French.
Different sites fall on different points of the spectrum from serious course to language-learning game, but what can’t be denied is that companies are discovering gamification as another way to retain your interest in language lessons.

The latest innovation comes in the form of systems which are intelligent enough to determine
a) what you need to learn and
b) which exercises will help you learn it.
They play the part of language teachers. The basic idea was pioneered by Khan Academy (for math, not languages), whose system keeps generating new questions on the same topic until you finally understand it. In 2011, Duolingo took it one step further by even leaving the order of introduction of new vocabulary up to the AI.
At the moment you can study English, French, Italian, Spanish, Portuguese, German, Dutch, Danish or Irish on Duolingo. Many more languages have been requested. If you want to have the computer teach you Chinese in a similar way, check out LearnYu, my site, which is currently in beta but already usable.
What innovation will we see next? For us language geeks, these are very exciting times.