The Polyglot Gathering 2015 just ended and I again had a lot of fun organizing it. If you attended the event, here’s a fun non-authoritative checklist I created in order to figure out whether you fully experienced the event 😉 Check off what you did.

Thank you for coming! The participants are what makes this conference awesome. See you next year! <3

The Polyglot Gathering 2015 just ended and I again had a lot of fun organizing it. If you attended the event, here’s a fun non-authoritative checklist I created in order to figure out whether you fully experienced the event 😉 Check off what you did.

Thank you for coming! The participants are what makes this conference awesome. See you next year! <3

This question came in on Quora just when I had spent three days with two of the greatest polyglots alive: Professor Alexander Arguelles and Richard Simcott. Both know more than 30 languages. We had also organized a polyglot dinner where people could speak 10 languages on average. All in all, I was in a unique position to answer this question and had a lot of fun doing so.

When being introduced at a polyglot dinner, everyone would speak English. Then, there was often a trial period where people would repeatedly switch languages in order to assess each other’s levels. This would happen without agreement or warning, just answer in a different language than the one you were speaking or add something like “Natürlich sprichst du auch Deutsch?” (of course you also speak German?).

The language that was finally chosen was often not people’s native language. For example, even though Professor Arguelles and Richard Simcott are both native English speakers, they spoke very little English with each other. Instead, people will communicate in their best “non-boring” language. “Boring” languages being ones that they already speak every day and have reached maximum fluency in. The idea is that you should learn something from speaking this language but without obstructing the flow of conversation. Adjusting for everyone’s comfort of course, because it would feel too unequal to communicate in a language that one person is completely fluent in and the other still regularly searches for words. So when Richard and Alexander recorded a short video where they talk about language-learning (forthcoming), they chose to do so in German, which they both speak perfectly, so as not to give even a hint of one-upmanship. At other times they also spoke a significant amount of Italian, Spanish, French and Russian to each other, and less often 8 or so other languages.

It’s another thing if the purpose is to practice. When polyglots meet, it’s often also an occasion to try out rarer languages that they don’t often get to speak where they live, for example Modern Greek, Modern Hebrew, Welsh, Esperanto and so on. At the polyglot dinner we hosted, with 8 people attending, more than 20 languages were spoken (in different pairings) over the course of two hours and at one point the entire table was learning phrases in Indonesian. The Polish-American-German group at the table next to us actually came over and asked where we’re from, because they heard so many different languages. A great occasion for Richard to flabbergast them some more by explaining in fluent Polish, which we hadn’t spoken yet 😉

Whichever languages you choose, being a polyglot and meeting another polyglot is great fun.

This year I organized my first major conference: the Polyglot Gathering in Berlin. It turned out a study in how polyglots like to have fun, with nearly 230 participants from 35 countries coming together for 4 days of program. Until now, I had only organized smaller meet-ups or done minor work for bigger conferences (like organizing the “JES al novuloj” scholarships for the Junulara E-Semajno). Then, Richard Simcott suggested at last year’s Polyglot Conference in Budapest that there may be no European polyglot event in 2014, and I decided to pick up the slack. Not alone of course; I had an awesome team of co-organizers, including my friend Martin Sawitzki, who is fortunately very experienced at organizing multi-day events for 200+ international participants.

So what did polyglots come to Berlin to do?

Most of the days were spent with lectures and workshops, ranging from beginner-friendly advice sessions like “How to Survive Grammar” (by HTLAL’s Iversen) to advanced “How to Maintain Multiple Languages at Once” (by Richard Simcott). There were also linguistics lectures such as “Language Death and Revival” (by Simon, creator of Omniglot.com) or a session on phonetics (by Cesco) and of course basic language courses for Chinese, Cantonese, Afrikaans, Esperanto and more. You can see the full planned program here. If you weren’t there, we have recorded several dozen lectures and will soon start to post them to the official Polyglot Gathering Youtube channel.

Everyone’s passion for languages – no matter how many languages they had learned so far – was apparent everywhere. Because of this, there were also many last-minute additions to the program, for example a basic course of Macedonian, an introduction to Klingon (thanks André Müller!), lightning talks in Latin, and so on. The aligatorejo encouraged people to practice foreign languages other than English and indeed there were days when I spoke as many as eight of my languages. I gave a lecture as well, on “Matching Methods and Goals in Language-Learning”. 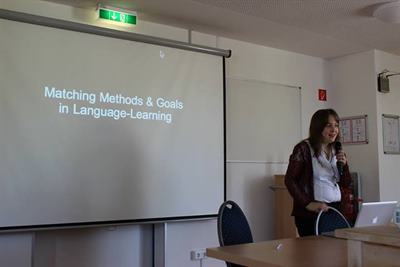 The evening program was when people really showed their geekiness, for example when it became clear that the people present in the room could translate the word “bird” into more than 60 (!) languages without the help of a dictionary (we had to stop at 60, so the final count is still open). Or when a group of phoneticians led by Cesco sang “Yellow Submarine” with exotic sound substitutions. Or when André showed he could read 10+ writing systems in the Writing Systems Challenge. Or when non-native speakers succeeded in doing tongue twisters like the Hungarian “megnemszentségteleníthetetlenebbségeskedéseitekért”. Also, it seemed like Welsh and Gaelic were the most popular languages for people to present songs and poetry in.

As an organizer, I had had the advantage of being able to schedule the lectures and workshops in such a way that it was highlight after highlight for me. But a lot of the fun came from unexpected and unscheduled things like the above. And of course the kind of participants we were able to attract. Wouldn’t you also like to hear linguistic tidbits from Professor Bernard Comrie? Or learn Toki Pona from its inventor? Have Benny Lewis explain how to travel the world on a tiny budget while learning lots of languages?

An unexpected highlight for me was when Richard Simcott took the stage in order to sing Disney’s “Let it Go” in 25 languages, a capella and without notes, switching effortlessly between languages as diverse as Dutch, Mandarin, Spanish, Russian, Thai and Hungarian.

Thank you, everyone, for making the Polyglot Gathering a dream come true!